Due to the pandemic, the MICM Artistic Team has decided to postpone our 2021 festival.  We will see you with our full festival in 2022!  Thank you for your support! 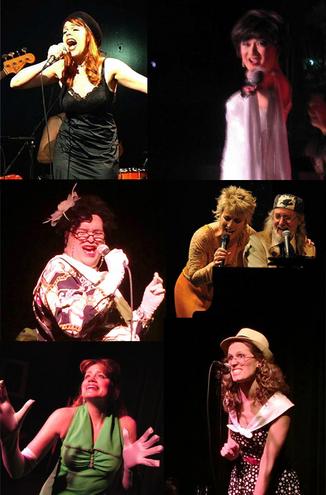 Pacific Northwest Cabaret Association/March is Cabaret Month  is powered by

We seek to offer the best in the versatile art of musical cabaret. We love discovering new artists and offering our audiences a wide and wondrous variety of shows, and in recent years our programming has featured acts performing everything from folk to opera, rock, blues, a cappella, French chansons, political satire, and the American songbook, as well as singer-songwriters playing their own unique material.

​
How did we get here?  Over a decade ago, cabaret artist Arnaldo! Dragchanteuse had a vision: Why not start a March Is Cabaret Month festival in Seattle similar to the one founded in New York in the early 1990s, designed to coax audiences out of their homes in the winter months? Presented by Arnaldo’s Pacific Northwest Cabaret Association, Seattle’s March Is Cabaret Month debuted in 2008 at Julia's On Broadway. In 2011, the Seattle festival expanded into its current venue at Egan's Ballard Jam House, where it continues to run every weekend in March, featuring an exhilarating variety of West Coast performers and sponsored by local arts patrons Brian Silkworth & Bill Colter and a grant from The Cricket Foundation. In 2019, the festival added an opening night at The Triple Door, one of Seattle’s most deluxe music venues; this new tradition continues in 2020.

What makes us run? Seattle’s March Is Cabaret Month Festival is presented by Pacific Northwest Cabaret Association, whose mission is to promote and preserve the art of the cabaret: intimate storytelling through music. PNWCA founder Arnaldo credits the inspiration to his 2005 attendance at The International Cabaret Workshop & Conference at Yale University and its late artistic director Erv Raible, who became his mentor. PNWCA is dedicated to the creation of a vibrant cabaret audience and community of artists; in addition to producing March Is Cabaret Month, the association offers cabaret workshops and master classes. Since 2017, Pacific Northwest Cabaret Association has been a member of the umbrella 501-c3 arts organization Shunpike.

Join our newsletter         Get your tickets here

entertainment held in a nightclub or restaurant while the audience eats or drinks at tables: "she was seen recently in cabaret" ·